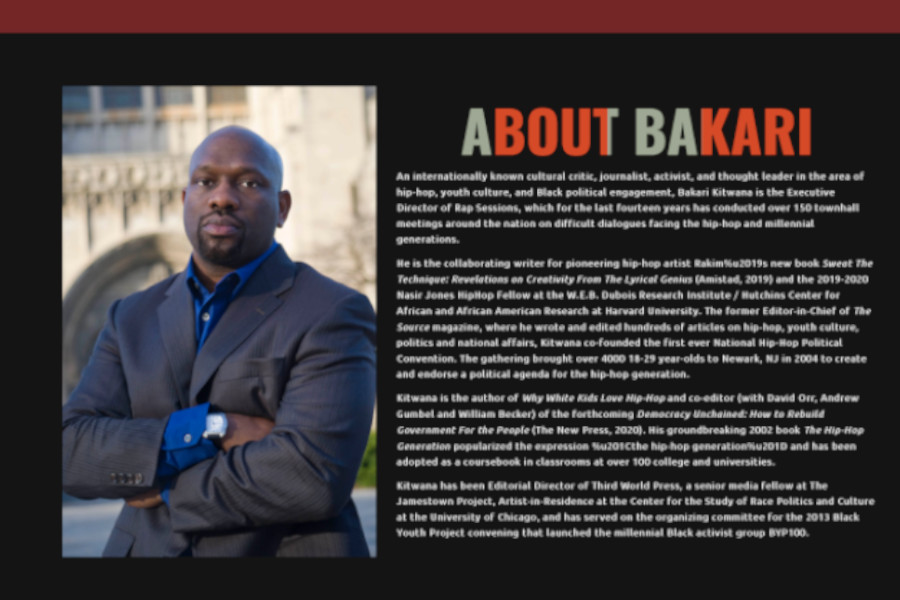 An internationally known cultural critic, journalist, activist, and thought leader in the area of hip-hop, youth culture, and Black political engagement, Bakari Kitwana is the Executive Director of Rap Sessions, which for the last fourteen years has conducted over 150 townhall meetings around the nation on difficult dialogues facing the hip-hop and millennial generations.

He is the collaborating writer for pioneering hip-hop artist Rakim 2019 new book Sweat The Technique: Revelations on Creativity From The Lyrical Genius (Amistad, 2019) and the 2019-2020 Nasir Jones HipHop Fellow at the W.E.B. Dubois Research Institute / Hutchins Center for African and African American Research at Harvard University. The former Editor-in-Chief of The Source magazine, where he wrote and edited hundreds of articles on hip-hop, youth culture, politics and national affairs, Kitwana co-founded the first ever National Hip-Hop Political Convention. The gathering brought over 4000 18-29 year-olds to Newark, NJ in 2004 to create and endorse a political agenda for the hip-hop generation.